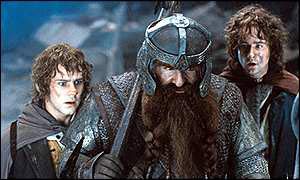 Lord Of The Rings won an Oscar for its soundtrack

Lord Of The Rings has beaten a host of cinema classics to be voted the best film soundtrack of all time, according to a new survey carried out by Classic FM.


The poll of more than 52,000 listeners saw the recent blockbuster beating off competition from such memorable movie soundtracks as Dr Zhivago, Gone With The Wind and ET.


Star Wars was voted into second place, with Schindler’s List, The Empire Strikes Back and Gladiator completing the top five.

Lord Of The Rings composer Howard Shore, who won an Oscar for the film’s music, said he was delighted with the results.


“It’s great to translate Tolkein’s work into music. I’m as thrilled as can be,” he said.


Shore, who has composed over 60 film scores including those for Silence Of The Lambs, Philadelphia and the recent hit Panic Room, is currently working on the soundtrack to the next Lord Of The Rings film, The Two Towers.


Meanwhile composer John Williams saw nine of his soundtracks making it into the top 30, including Raiders Of The Lost Ark, Superman, ET, Schindler’s List and the recent Harry Potter And The Philosopher’s Stone.

However, his memorable score for Jaws was a surprise omission from the list.


British composer John Barry scored three mentions, for Out Of Africa, Dances With Wolves and the 1968 film The Lion In Winter – but none of his James Bond soundtracks, for which he has become famous, reached the top 30.


Others to feature included Maurice Jarre for Lawrence Of Arabia and and Dr Zhivago, and British composer James Horner for Titanic, Braveheart and The Mask Of Zorro.


A number of classical composers also received votes, including Rachmaninov, whose music was used in the classic romance Brief Encounter, and Strauss, who was featured in the score to Stanley Kubrick’s 2001: A Space Odyssey.